­­I am a screenwriter and director and I also teach film making. I am currently a Senior Lecturer at the University of Derby where I am Programme Leader of the MA Writing for Performance and teach into the MA Film and Photography, BA (Hons)Film Production, and BA (Hons) Theatre Arts. I have supervised many hundreds of short films from script to production in both the UK and in New Zealand since I began teaching the form in 2001. Most recently, a short film I developed and supervised won a British Royal Television Society award for Best Student Drama (November 2015). I was awarded a PhD by the University of Derby in 2015, the exegesis considers my own films and the films of other female directors in New Zealand in the context of, and in response to, the derugulation of the New Zealand Economy in the late 1990s.

My short films and first feature represented New Zealand in official competition at dozens of International Film Festivals. My films have been nominated for 14 awards winning on several occasions. Since I relocated to the UK in 2009 I have been endorsed for my expertise in film by Anna Seifert Speck, Senior Talent Executive at Creative England and have enjoyed the support of Moonstone International’s Directors Lab, among other competitive selections.

Parallel to teaching, I have sustained a career in screen writing, commissioned by both independent production companies and by state funding agencies. I have also written and directed television drama in New Zealand and have several international features in development as a writer.

I have recently completed (February 2016) a UK commission to write and direct a short film for the Shine a Light project, which aims to give visability to sectors of the community hitherto little seen on the big screen in the UK. Financed by the Esmee Fairbairn Foundation and Creative England, my brief was to work with elderly gay activists to realise a film that addresses their current concerns and experiences. My film explores what happens when an elderly man is pressured to return to the closet in his dying days.

In the last few years I have also developed an interest in film art as a counterbalance to my narrative work. Quickening (2012/13), a digital installation I made with colleagues Stephen Watson and Dr Jane Fletcher, was exhibited at The Sichuan Institute of Fine Art in China in an exhibition curated by internationally reknowned digital artist John Goto with the support of the British Council and the University of Derby. These works will now be installed in Pickford House Museum in Derby from October 2016. The Derby Museums Trust has also comissioned a further series of works for the opening of a new museum in 2020. 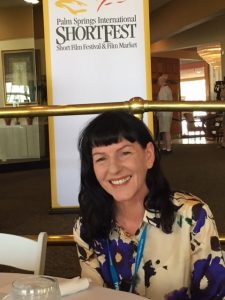